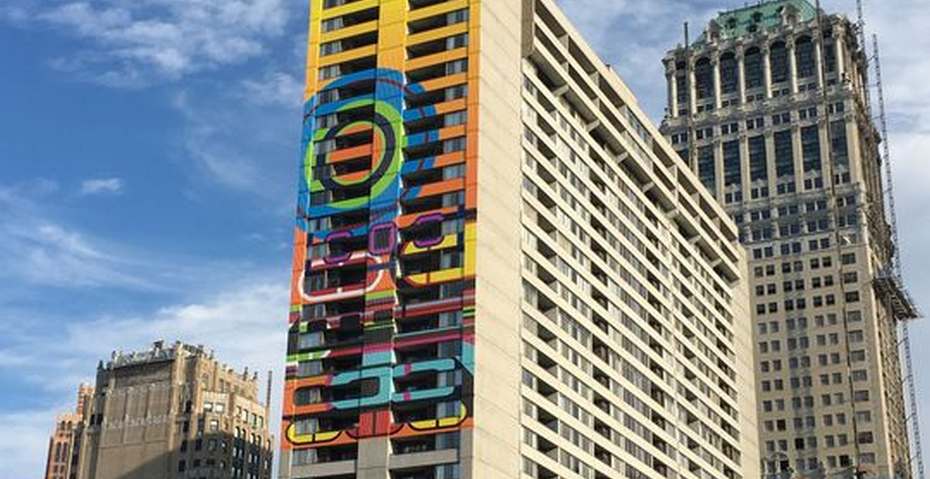 Beverly Fishman's been obsessed with pharmaceuticals for years.

In 2013, she staged a startling show at Wasserman Projects that scattered dozens of huge, brilliantly colored, blown-glass pills and lozenges pell-mell across the gallery floor.

It's part of her critique of the pharmaceutical-industrial complex, which she argues pushes pretty pills and hopeful messages, all meant to seduce the unwary. As far as Fishman's concerned, things have gotten way out of hand.

"It's capitalism," she said, chatting in her cheerfully crowded studio at the Cranbrook Academy of Art, where she's artist-in-residence for painting. "It's over-prescription."

Fishman, who's returned to her roots in painting for the moment, is suddenly all over downtown Detroit.

She's got works in "Xeriscape," a five-woman group show at Library Street Collective up through Aug. 25, and — far more spectacularly — a 175-foot-tall, dayglo-colored mural, "Rise," that towers above Washington Boulevard and dominates the view south from Grand Circus Park.

The mural deal was engineered by Anthony and JJ Curis at the Library Street Collective with Jonathan Holtzman, whose real-estate development company owns Detroit City Club Apartments where the painting went up.

"Jonathan was really interested in working with someone based in Detroit," said Anthony Curis. "Our immediate thoughts were of Bev, who's been interested in exploring larger forms of public art. This seemed like a perfect fit."

You think of a mural being applied to a flat wall, but that's not quite what Fishman had at her disposal. The north face of the grey-concrete, brutalist building, where the mural's located, is full of balcony cut-outs.

"I got in front of the building and was really taken aback," Fishman said. "I had to consider the very repetitive horizontality of the balconies. I couldn’t ignore that."

So instead she worked with it, and with Sara Nickleson at Library Street Collective developed a small prototype or maquette that worked around the horizontal gaps. You'll note some of them look a bit like pills.

Nickleson then collaborated with Jordan Zielke at Motown Sign Co. to transfer the design onto the ridged concrete of the building facade.

"Sara did a phenomenal job," Fishman said. "She made this thing happen."

The mural was completed on May 31, after about four weeks of painting.

Her pieces are always site-specific, Fishman notes, and that was certainly the case here.

"I wanted to capture the energy of the city," Fishman said. "I had this huge vertical with a lot of sky around it. I thought, 'Wow -- this yellow-orange will really pop against a bright blue sky.'"

Right across the boulevard at David Klein Gallery, Christine Schefman says that "Rise" has revolutionized the look of the whole district.

"I’m looking at the mural right now," said the gallery director, "and it looks fantastic against the sky. It’s a great addition to the neighborhood. It really livens up this area."