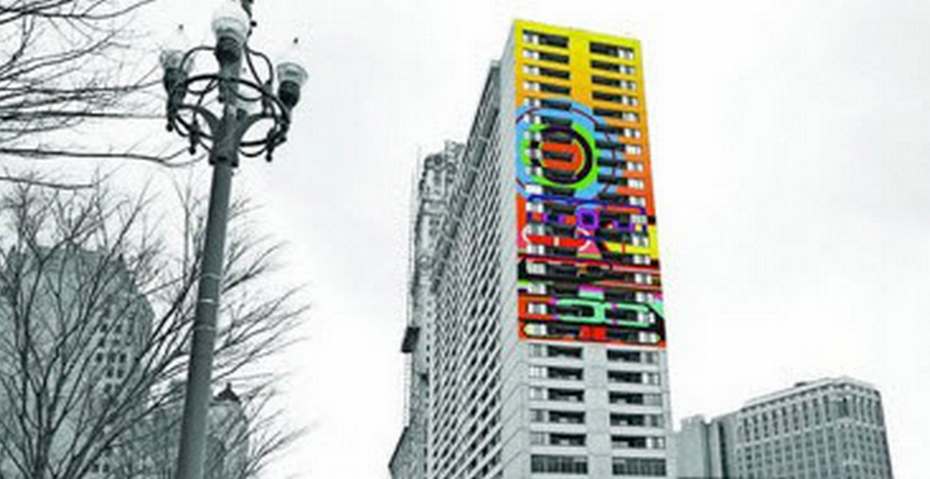 Are massive murals the new sign that spring is en route to Detroit?

A new 170-foot-by-60-foot mural by accomplished artist and educator Beverly Fishman will rank among the largest pieces of public art in the city once it’s finished by early May.

Entitled “Rise,” the colorful, abstract mural will bring a vivid transformation to the north-facing wall of the brutalist-style architecture of the Detroit City Club Apartments at 1431 Washington Blvd. The building boasts 351 units with a range of amenities similar to a hotel.

Weather permitting, sign painting company Motown Sign will start working on the mural within the next 10 days, and owner Jordan Zielke says he expects the mural to take up to four weeks to complete. It will require 100 to 150 gallons of paint.

A photo illustration of what the mural titled “Rise” by artist Beverly Fishman would look like on the Detroit City Club Apartments in Detroit. (Photo: Staff Illustration; Beverly Fishman, Romain Blanquart, DFP)

The new mural will cost approximately $100,000 and is considered a “personal investment” for Jonathan Holtzman, the CEO of Farmington Hills-based multi-family real estate company City Club Apartments, according to the company’s vice president of brand strategy and design Peter Burgoyne.

“One thing that is a real driver of our brand is infusing art and design into all of our public spaces,” says Burgoyne. “The other thing that is really important is being part of the city that we’re in. Detroit is the hometown of (Holtzman) and it’s important to him that we draw from the local environment.”

Fishman’s “Rise” mural will cast a shadow on Holtzman’s latest development at the site of the former Statler Hotel at Washington Boulevard and Park Avenue. Currently under construction, the new development is expected to be at least seven stories, and will house nearly 300 residential units and more than 10,000 square feet of retail, including Burgoyne says, a gourmet market.

Burgoyne says “art is part of the brand” for City Club Apartments, who partnered with JJ and Anthony Curis of Library Street Collective to find the right artist for the project.

“It all comes down to examining each project on a case-by-case basis,” says Curis. “The architecture of the space, complexity of the project — all of those things define who we might be interested in speaking to.”

Curis and his contemporary art gallery at 1260 Library St. have become de facto art brokers for downtown Detroit’s growing list of murals and public art installations with high-profile collaborations between the gallery and Shepard Fairey, How & Nosm, McGee and now Fishman.

Many of their projects are partnerships with Bedrock Real Estate Services like the Belt art alley, which highlights a slew of emerging young artists.

When it comes to the large-scale murals, however, Curis has given a spotlight to older, more established artists like McGee, a living legend of an artist who is set to turn 94 this summer, and Fishman, an acclaimed artist with four decades of accolades and accomplished educator who currently heads the MFA painting program at the Cranbrook Academy of Art in Bloomfield Hills.

It'll match the 60-foot width of the Shepard Fairey and How & Nosm's murals on the north side of the One Campus Martius building, but fall 14 feet shy of matching their height.

The four murals are within blocks of each other and highlight contemporary artists in various stages of their careers, yet each one favors color, pattern and abstraction over a figurative narrative.

Speaking via e-mail, Fishman says the mural’s “rhythmic repetitions” were designed to counterpoint the building’s horizontal balconies and were inspired by the “pulse of the city’s electronic music scene” as well as “the echo of its assembly lines.”

“Detroit always had a huge effect on me — even before I moved to the area,” says Fishman, who grew up in Philadelphia before migrating to New York and eventually settling in Michigan in the 1990s.

Fishman says the colors chosen for the mural are part of a much larger conversation of how lighting affects not only the mural but the city itself — not unlike the changes the cityscape has seen with the addition of LED streetlights in recent years.

“Every decade, the world of colors in which we live evolves as new lighting systems develop and others go out of fashion,” says Fishman. “I wanted the mural to reflect the development of new types of lighting and how the visible surfaces of the city are constantly evolving.”

Curis says the new mural is expected to be completed before the Urban Land Institute’s 2018 spring meeting May 1-3 at Cobo Center in downtown Detroit.

The Washington-based nonprofit will focus on Detroit’s reinvention downtown and will feature keynote speakers like Dan Gilbert and Chris Ilitch.