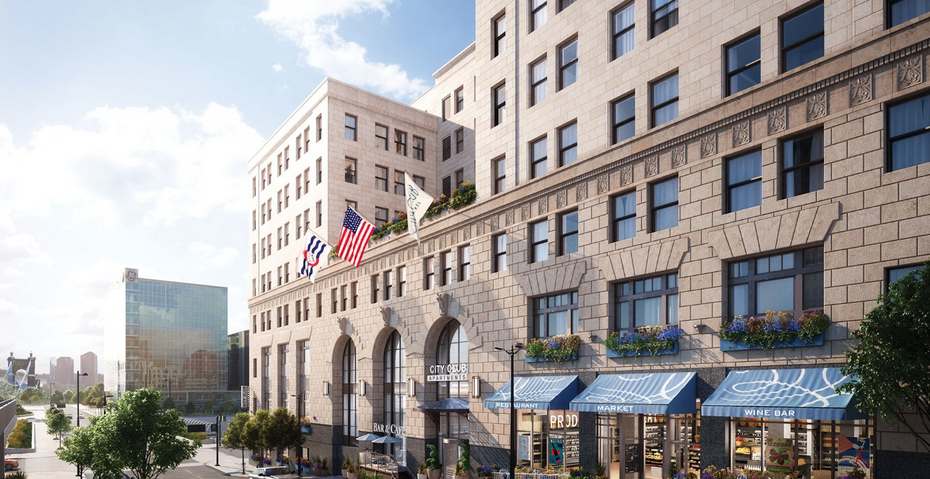 The most historic corner in the city will soon be bustling once again. The northwest corner of Third and Vine streets was the site of the Burnet House, the famous 19th-century hotel that played an important role in ending the Civil War.

City Club Apartments is renovating the former PNC Annex building at 309 Vine St. into luxury apartments, along with a marketplace, café and rooftop restaurant. The first tenants are moving in this month.

The renovation includes restoring many of the original features in the lobby of the beaux-arts-style annex built for Union Central Life Insurance Co. in 1928, including the marble walls, decorative metal work, ornate ceilings and white-on-black maps of old Cincinnati along the frieze.

In the foyer, an aged bronze tablet original to the building features a bas-relief bust of prominent early settler Jacob Burnet and tells the site’s storied history.

“This site was occupied before 1802 by an Indian mound”: Early settlers found elliptical Indian burial mounds built by the ancient Adena people throughout the Cincinnati basin.

In his 1815 book “Natural and Statistical View, or Picture of Cincinnati,” Dr. Daniel Drake described a large mound east of Race Street at Fifth Street that extended nearly to this site.

“From 1802-1825 by the estate of Judge Jacob Burnet”: Burnet was a judge and politician in the Northwest Territory, a U.S. senator and president of Cincinnati College. Debts forced him to sell his mansion in 1825, and he moved to Seventh and Elm streets.

In 1842, William Shires used the property for a summer garden and theater with a restaurant in the Burnet mansion. Shires’ Garden burned down in 1848.

“From 1850-1926 by the Burnet House”: Designed by renowned architect Isaiah Rogers, “the finest hotel in the world,” as claimed by the Illustrated London News, boasted 340 rooms and modern amenities like running water.

The H-shaped hotel was capped with a dome in the middle, making it look more like a capitol building. A grand tiered staircase led to Ionic columns at the entrance.

Every notable Queen City visitor, from Oscar Wilde to Jenny Lind, future presidents to a future king (Edward VII), stayed at the Burnet House. Abraham Lincoln was a guest twice, the last time on his birthday en route to his inauguration.

On March 20, 1864, Gens. Ulysses S. Grant and William Tecumseh Sherman met in Parlor A on the second floor, spread out maps and made the plans for how to end the Civil War. The beginning of the end happened there.

The Burnet House was remodeled in 1885, without the dome and with a new Vine Street entrance. (Photo: Provided)

Architect James W. McLaughlin supervised a major remodel in 1885. The dome was removed, and a new main entrance was created on Vine Street.

By the 1920s, the city’s activities had shifted away from the river to the financial and shopping districts on Fourth and Fifth streets. Mid-19th-century modern was outdated, and the Burnet House was torn down in 1926.

Union Central Life Insurance purchased the site to build an annex to their distinctive neoclassical skyscraper at Fourth and Vine streets. The plan was an 18-story structure in the same style, but only the first nine-story section was completed. The buildings have been occupied by Central Trust Bank and PNC Bank.

The annex building has a similar H-shape and configuration as the remodeled Burnet House in possible homage. The spirit of the Burnet House lingers at the site.