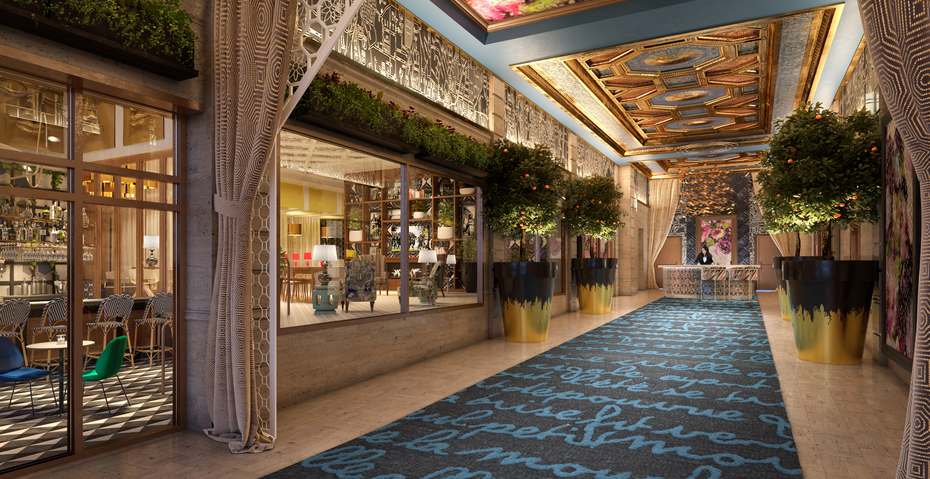 When Oscar Wilde Visited Cincinnati, Everybody Freaked Out About It

Oscar Wilde landed in 1882 Cincinnati with an impact few rock stars could manage today. The Cincinnati newspapers carried more than 500 articles about the “youthful priest of the beautiful” that year alone. His lectures on decoration and art sold out at premium ticket prices and the social titans of the Queen City fought to entertain him.

SCANNED BY LIBRARY OF CONGRESS; IMAGE EDITED BY GREG HAND

Wilde made three visits to Cincinnati in 1882, twice in February and again in June. Although Cincinnatians thronged to the Grand Opera House to hang upon Wilde’s every aesthetic pronouncement, Wilde was in America as a publicity gimmick for Richard D’Oyly Carte, the British theatrical producer. D’Oyly Carte owned the new Gilbert & Sullivan comedy “Patience,” a spoof on the very aesthetic school represented by Wilde himself. A character in the operetta, Bunthorne, caricatured Wilde in a not very flattering manner. But, the money being good, Wilde agreed to traipse across the Colonies to gin up American interest in a British artistic movement so Mr. D’Oyly Carte could sell lots of tickets.

From the moment Oscar Wilde disembarked in New York, Cincinnati newspapers followed his every move, noting that florists sold out of sunflowers and lilies whenever he appeared, and that young men wore capes and wigs to emulate their aesthetic hero at all his public lectures. Cincinnati stores put “Oscar Wilde” shoes on sale and advertisements touted Opera Puffs, his preferred brand of cigarette.

Although most of the buildings he actually visited are no longer extant, you can follow Oscar Wilde around 10 Cincinnati locations to get a sense of the artistic core of the Queen City in 1882:

1. Burnet House
Located at the northwest corner of Third and Vine, the Burnet House had, since 1850, enjoyed its reputation as the premier hotel of the city. Rooms rented from $4.00 a night. At one time or another, everyone from Abraham Lincoln, Ulysses S. Grant, James Buchanan, Jenny Lind, and the Prince of Wales stayed there. Wilde occupied Room 62 on the second floor, where he was visited by reporters from most of the town’s daily newspapers in a room overflowing with lilies and rosebuds (the Fourth Street florist, B.P. Critchell, was all out of sunflowers). This was his residence on all three of his Cincinnati visits. A plaque at the corner of the Union Central Building annex marks the location of the hotel.

2. Robert Clarke & Co. Booksellers
Venerable Cincinnati book shop Clarke & Co. was the city’s most distinguished book dealer for almost 50 years (1858 to 1909). It was located on the south side of Fourth about halfway between Walnut and Vine. On the afternoon of February 20, Wilde visited the shop and selected several books, including volumes by William Dean Howells, Henry James, Louise McLaughlin, and others. Clarke’s was among the locations selling tickets to Wilde’s lectures.

3. Rookwood Pottery
Don’t think Mount Adams. Rookwood Pottery in 1882 was operating in its original location at the intersection of Litherbury and Eastern avenues way out in the East End. Litherbury is no more and Eastern Avenue is now Riverside Drive. Rookwood would have been located about where the railroad trestle north of Kemper Lane crosses Riverside. Wilde was pleased with the artistry at Rookwood, but thought vases and plates were not appropriate for painted scenes and figures. He greatly admired the designs of a young painter named Henry Joseph Breuer, who went on to a career as an artist of some renown in California.

4. School of Design
We now know this institution as the Cincinnati Art Academy, but in 1882 it was freshly independent from the University of Cincinnati and was still known by its original name. The School occupied rooms in the College Hall on Walnut Street north of Fourth. Although that building was owned by the Young Men’s Mercantile Library, the building was not called by that name until it was demolished and replaced by the current building in 1902. Wilde was appalled that the students were prohibited from smoking. “Great heaven, they speak of smoking as if it were a crime,” he remarked. “I wonder they do not caution the students not to murder each other on the landings.”

5. Art Museum
Wilde left the School of Design and ventured to the Cincinnati Art Museum whose doors “were inhospitably closed,” according to the Cincinnati Gazette. Wilde’s spirits were dampened as well by the weather. It rained throughout his February visits.

6. Rookwood Estate
The famous pottery was named for the residence of its founder, Maria Longworth Nichols. The Rookwood estate on Grandin Road was built by her father, Joseph Longworth. The estate is no more, subsumed around 1950 into a subdivision with streets named Rookwood near the Cincinnati Country Club. Wilde made a brief visit on February 20 and returned four days later for luncheon with Mrs. Nichols and her friends.

7. Music Hall
On the evening of February 20, Wilde went to Music Hall to witness the great Adelina Patti performing in Giuseppe Verdi’s Aida as part of the Opera Festival. According to Robert Herron in the July 1957 issue of the Bulletin of the Historical and Philosophical Society of Ohio: “That evening he went to hear Patti in Aida, and sat in the manager’s box. The audience was hard put to watch both Patti and Wilde, one in a slave’s chains and the other in knee breeches. After the performance, Oscar went backstage and was presented to the diva. It is a matter of historical record that during the course of Aida, Oscar Wilde smoked, appropriately enough—Opera Puffs.”

8. Grand Opera House.
On Wilde’s return to Cincinnati on February 23, he was engaged to speak at the Grand Opera House on Vine Street, around where the Huntington Bank Tower is located today northwest of Fountain Square. A crowd of more than one thousand was disappointed that Wilde wore grey trousers instead of his “aesthetic” knee breeches, but generally admired his observations.

9. Mrs. Andrews’ Boarding House
Wilde had been introduced to John R. Gandy, a decorative artist—what we might call an interior designer—and accepted an invitation to dine with him at his lodgings at Mrs. Maria Andrews’ boarding house at the northwest corner of Seventh and Elm. Guests included Cincinnati artists Henry Farny and E.K. Foote, Captain and Mrs. William M. Waterbury, and Mrs. Andrews’ son, whose name survives as a Cincinnati institution: Loring Andrews of Newstedt-Loring Andrews.

10. Oakwood
The morning after the Gandy dinner, Wilde took a carriage to Clifton to visit hardware merchant Henry Probasco who, a decade earlier, had given Cincinnati the Tyler Davidson Fountain. Mr. Probasco’s home, Oakwood, at 430 West Cliff Lane, still exists. Wilde would have spent the morning enjoying Probasco’s rare books, including a first folio Shakespeare, an early edition of Dante, and a rare medieval Greek Bible.

Drawing of Residence of Henry Probasco, from Illustrated Cincinnati by D.J. Kenny, published 1875

11. Musical Club
On his return to Cincinnati in June of 1882, Wilde attended a meeting of the Musical Society at 200 West Fourth Street. Dr. Frederick Forchheimer presented a paper on “Our Musical State” that Wilde seemed to enjoy. Invited to make a few remarks, according to Herron, “He condemned with stinging severity and excellent drollery the American custom of omnipresent advertising . . . . But the best thing said was his witticism against the Mormons. He said that he had always thought it a very prosaic arrangement to marry so many women, because it is much more poetic to do as we are accustomed—marry one and love many.”

Wilde left Cincinnati and never returned. Cincinnati papers continued to report his remarks and were happy to relate that, on his return to England, he was quoted to the effect that Cincinnati, Chicago, and San Francisco were the “kindest” and friendliest cities he had visited during his entire tour.

This article was reposted with permission from Greg Hand, editor of Cincinnati Curiosities