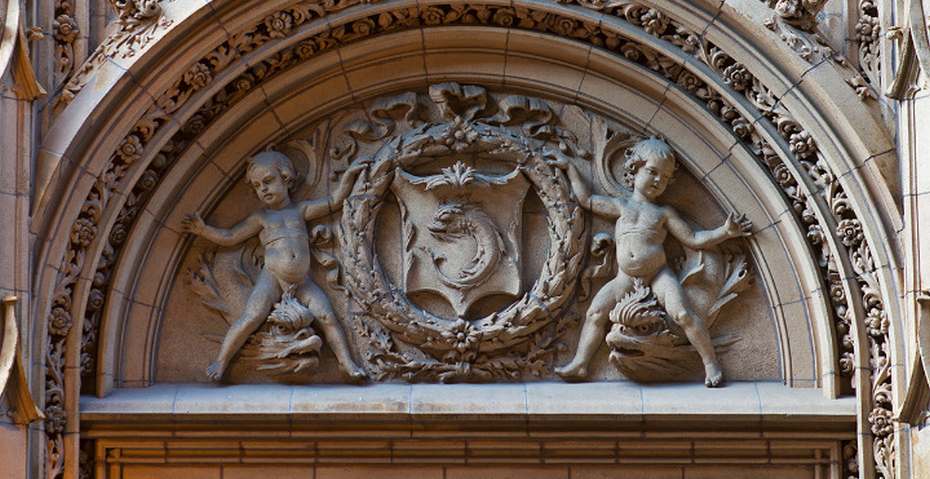 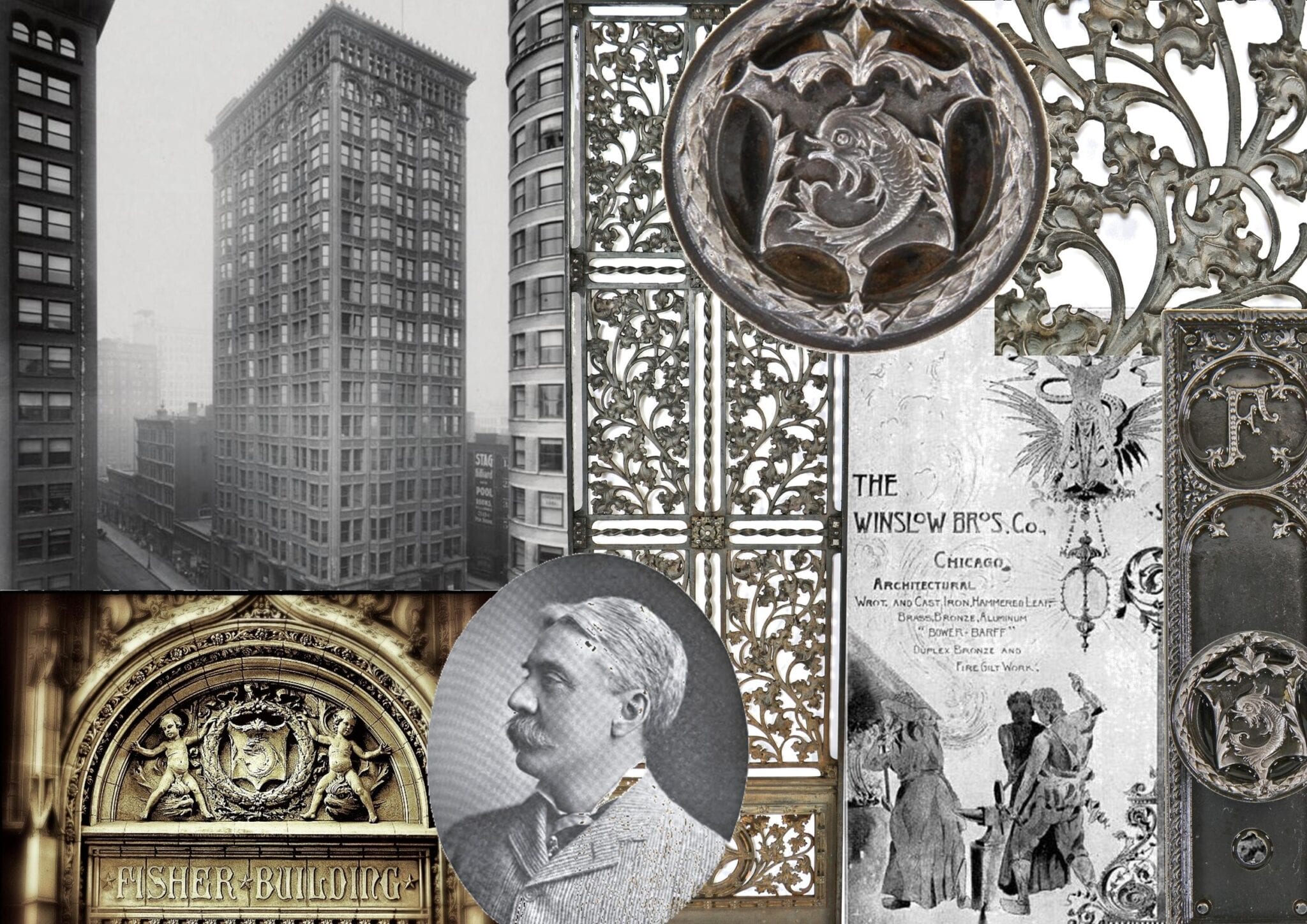 "to appreciate the fisher building one has to see it in the late afternoon of a winter day. the fading daylight softens the redundant ornament detail; the lighting within transforms the wall into a glittering and transparent sheath crossed by thin horizontal and vertical lines" -carl condit, architectural historian 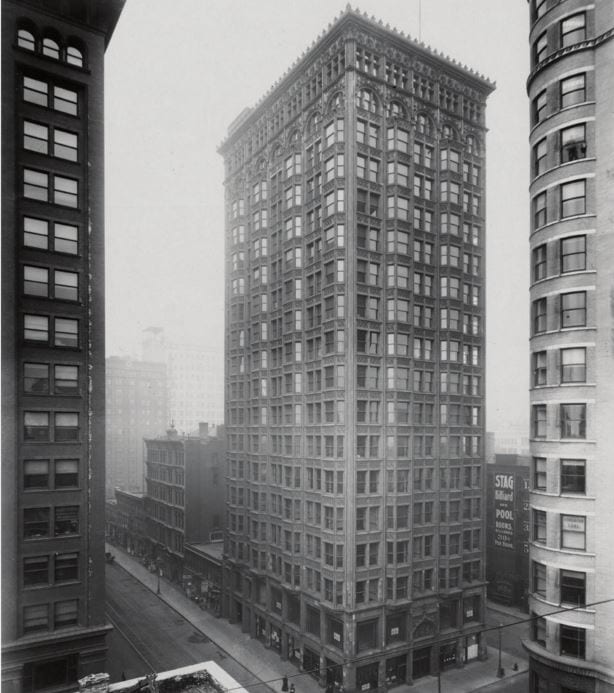 Continuing to highlight historically important ironwork in the bldg. 51 collection, the virtual catalog records a striking gothic style cast iron elevator door panel removed from the fisher building lobby during renovations or upgrades. the complete panel features a well-executed and dynamic motif of intertwining leaves with delicate border-work. the original finish is largely intact, appearing as a rich, velvety black or blue metal achieved by use of the bower-barff process. 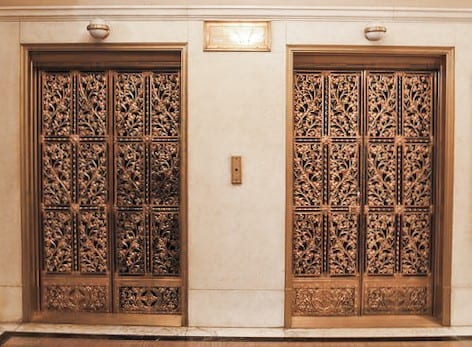 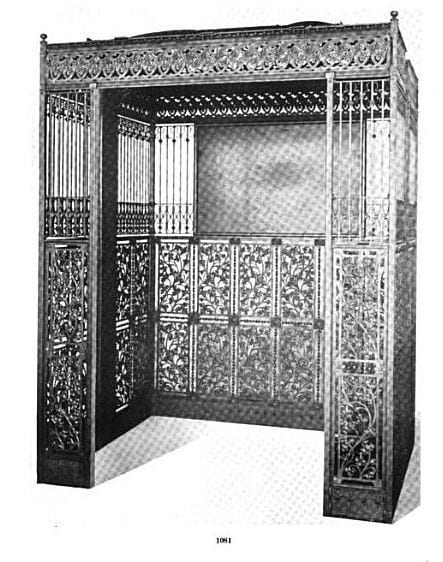 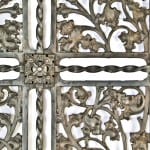 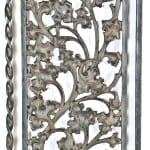 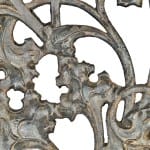 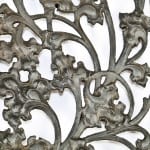 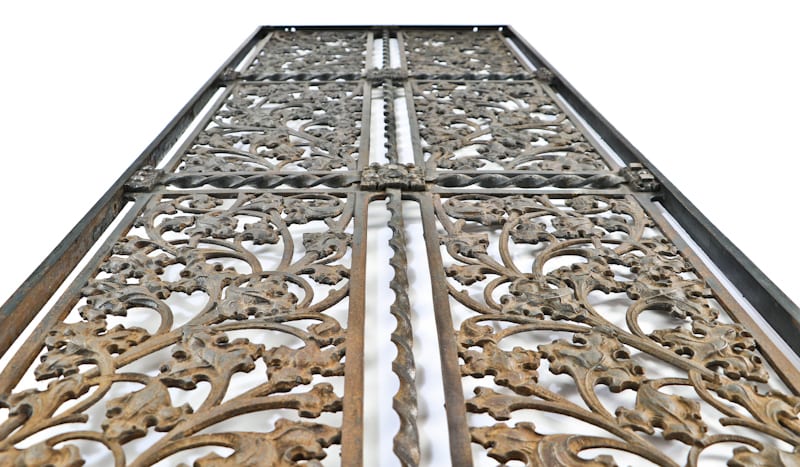 The fisher building (at 343 s dearborn street) is a 20-story, 275 foot neo-gothic landmark building in the south loop, its location once forming a center of printing, binding and publishing. the fisher was surrounded by many loft structures, office buildings, insurance concerns, and, at the time of its construction, the bustling traffic of horse-drawn wagons. the fisher building office tower was supported by a steel-riveted skeleton, extensive wind bracing, and by 25 foot piles anchored beneath massive spread foundations. its height set it apart, as its permit was granted just before a citywide limit took effect, restricting new buildings to no more than 12 stories. 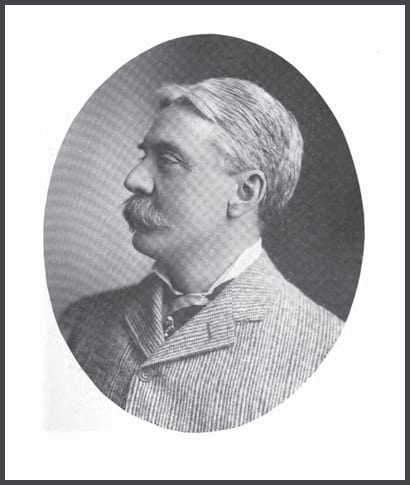 The structure was commissioned by paper magnate lucius fisher, a member of the illustrious 'field' family of chicago, and a businessperson who'd eventually come to be owner and president of the union bag and paper company (which at one point owned large tracts of timber lands, eighteen paper mills, several wood pulp mills and produced 20 million bags a day). as early as 1886, fisher invested in real estate, and in 1892 began leasing a one-story building which would several years later come to be fisher's own property; it was soon transformed into a decadent skyscraper, replete with ornament alluding to or visually punning on his name. 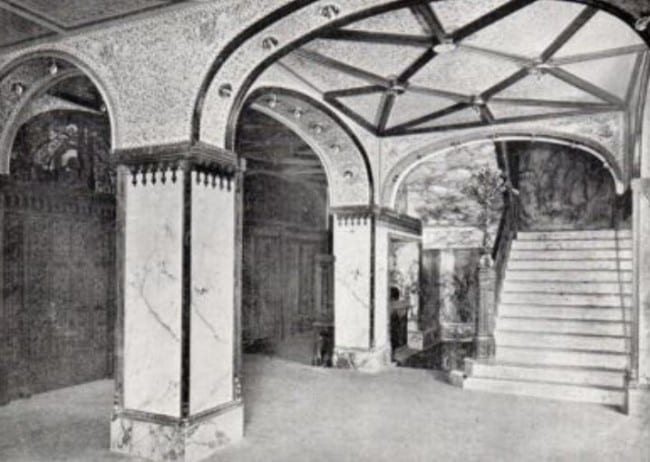 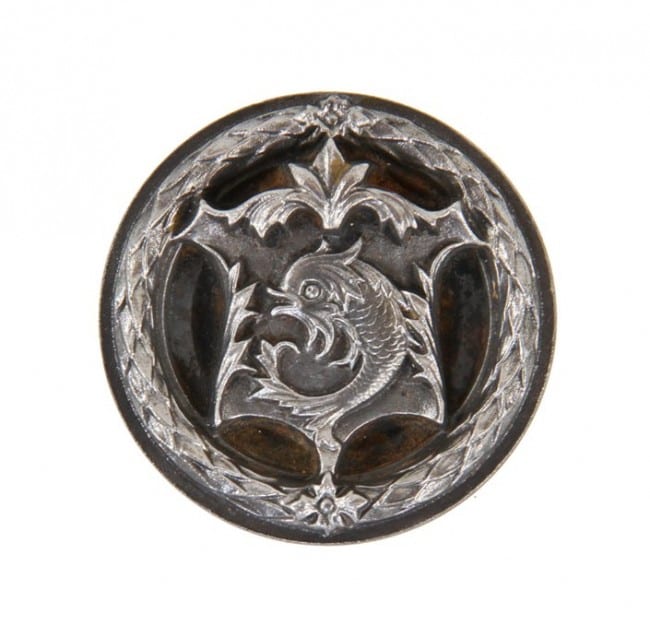 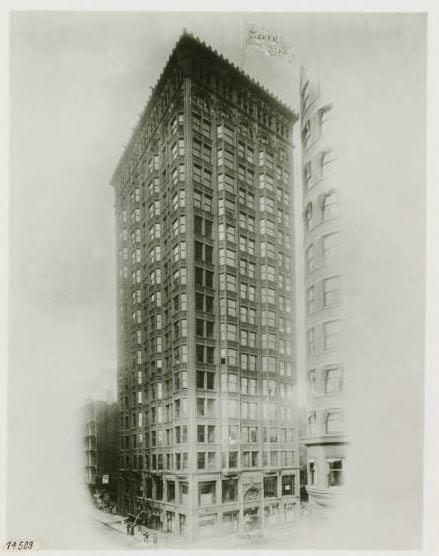 The building was originally designed by charles atwood (though he died before its completion, making it his last commission). it was completed in 1896 by d.h. burnham & company with a later addition of two stories in 1907 by a former employee of the burnham firm, peter j. weber. weber designed and oversaw the building's addition, which included grafting another tower to the north wall of the building (a similar process was undertaken with its neighbor, the monadnock). at its completion near the end of the nineteenth century, the fisher building was one of two buildings that stood 18 stories tall (the other being the masonic building, and while the masonic temple was taller and older, it was demolished in 1939). 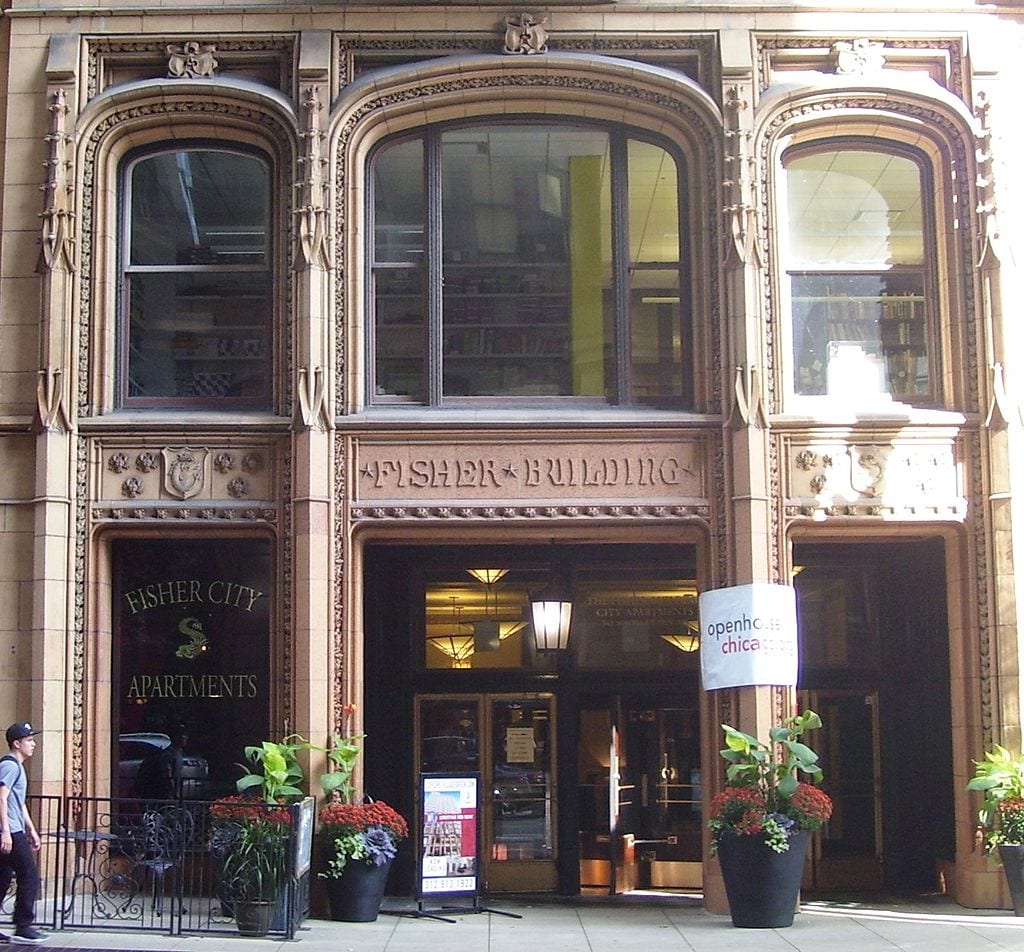 The fisher building was the immediate successor to the reliance building, and shared structural similarity, though it surpassed the reliance in use of the braced frame by thoroughly rejecting masonry for structural and cladding purposes, fully breaking with traditional methods of construction; the fisher building neither used brick in its structure or as cladding. it was known as "the building with no walls." its technological advancement was also marked by the speed at which the fisher was constructed (surpassing even that of the reliance). the steelwork of the top 13 1/2 stories was erected in a record-breaking two weeks -- where once a single story building had stood, an entire steel frame for the skyscraper was completed in a single month. just 9 months after groundbreaking, the fisher building was opened to tenants. 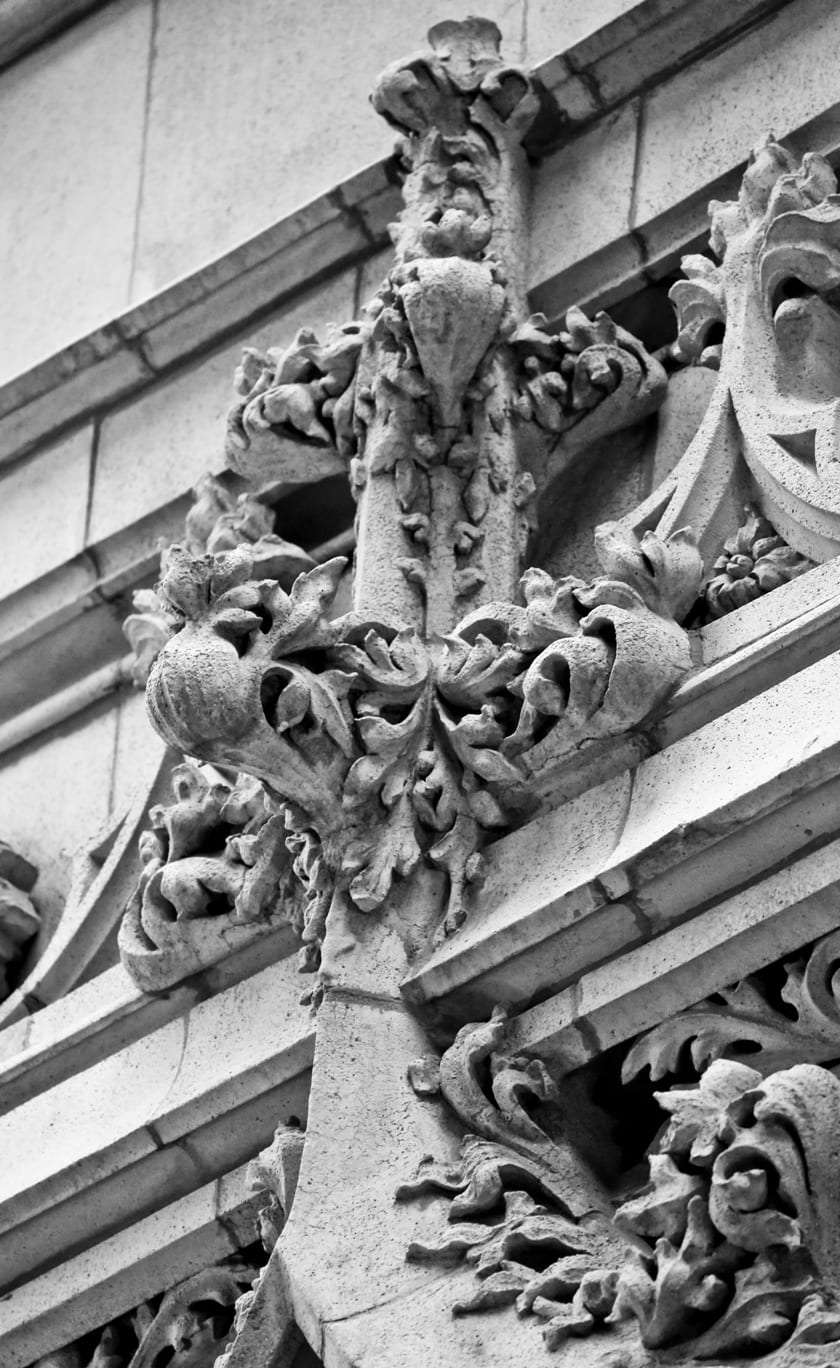 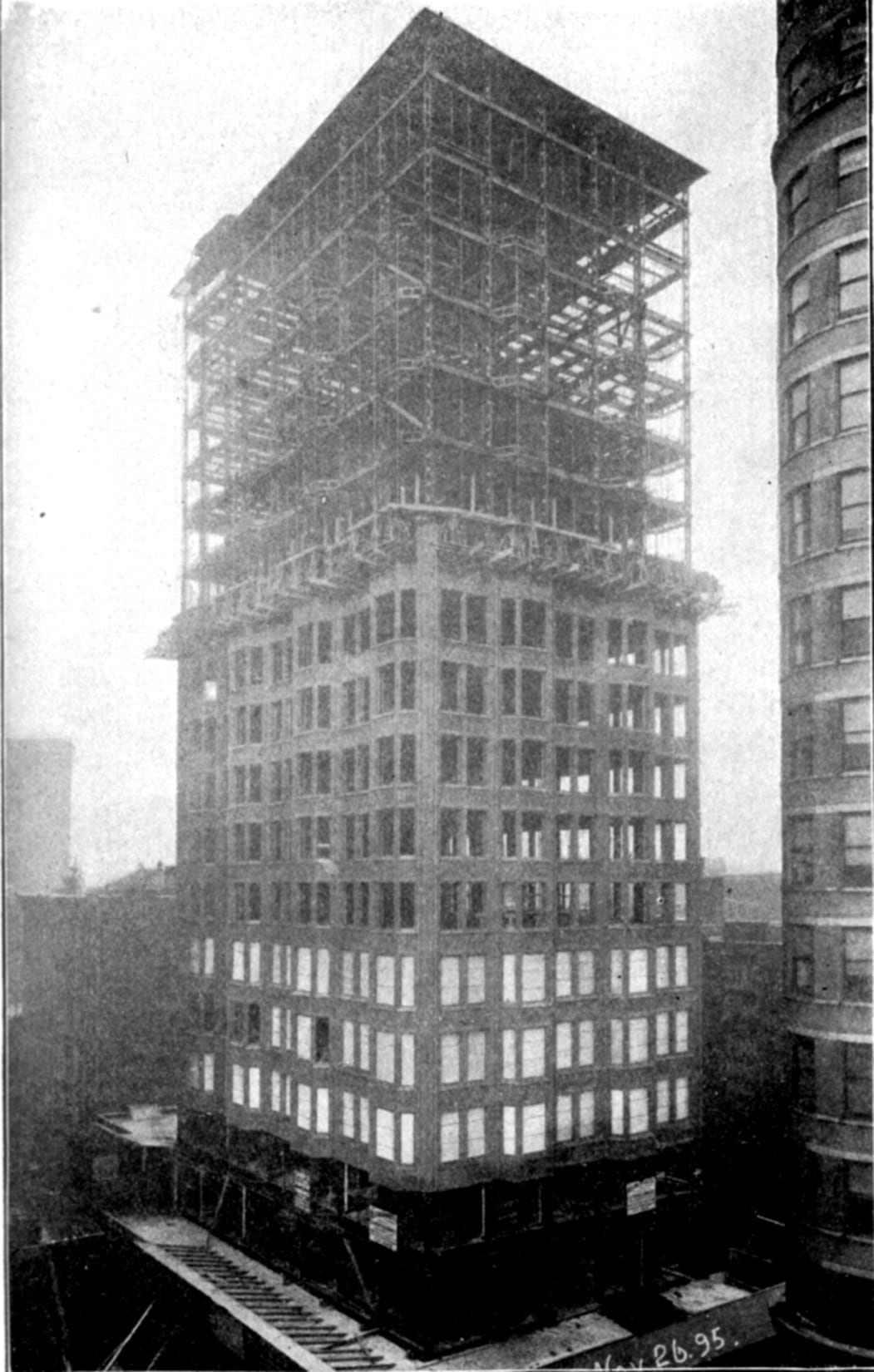 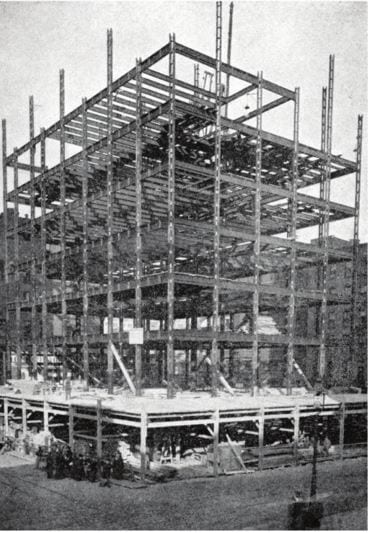 The large gothic revival building was located just diagonal to the monadnock block, the facades in perfect contrast, and demonstrating the evolution of landmark skyscrapers (and further, those which daniel burnham had a hand in). the neighboring monadnock block represented a predecessor designed by burnham and root in 1893, and one in which the developer had insisted upon no exterior ornamentation. whereas the monadnock block exhibited uncommon minimalism, the fisher building was highly ornamental with aquatic and mythical decor -- fish, crabs, snakes, salamanders., dragons, and seashells. the fisher took its cue from fifteenth century french and belgian design in its escutcheons, trefoil, ogee arches, poppy-head finials, colonettes, and fleur-de-lis. according to some, charles atwood was inspired by the rouen cathedral in northern france, a 13th century building that was a "masterpiece of lacy stonework." atwood used expansive glass along e.c. shankland's thin structural bones of gray steel columns, wrapped by orange-yellow terra cotta. over 70% of the facade was plate glass, in alternating single-bay oriels and flat panels. it altogether comprised a lightweight curtain wall, placing it well within the realm of the chicago school of architecture. 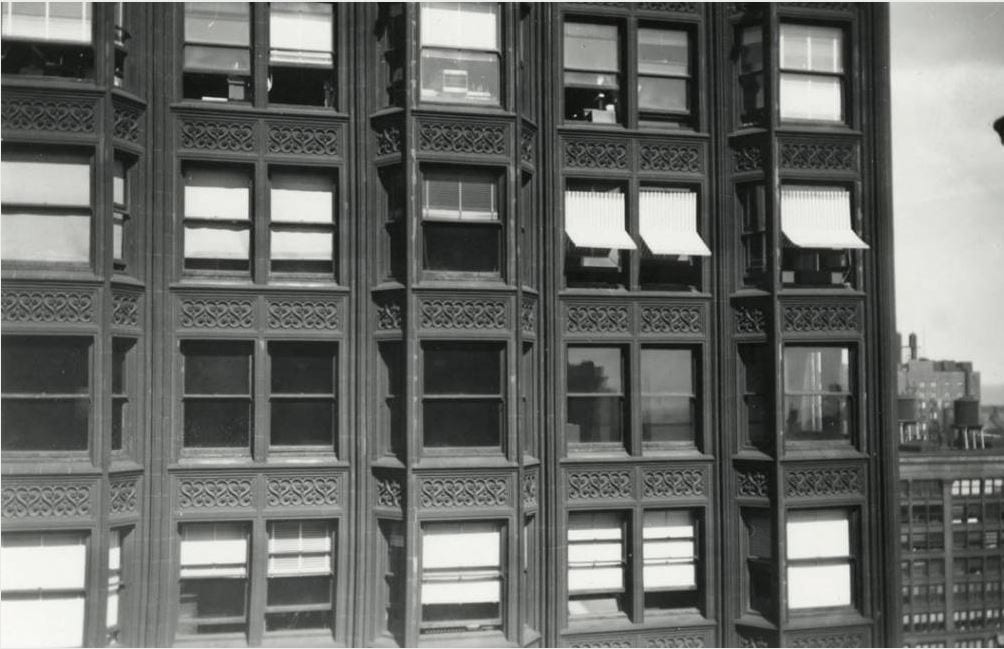 The building housed the union bag and paper company, as well as wheeler, fisher & company (a subsidiary). when it opened, it further had a full tenant roster, and boasted 6 steam-driven passenger elevators to carry them. the elevator ironwork was fabricated by the winslow brothers foundry of chicago. founded around 1887 by brothers william and francis winslow, they specialized in ornamental iron and bronze work. within a very short time thereafter, the winslow brothers would become one of the most accomplished foundries; outfitting numerous notable buildings and residences with skillfully executed metal ornament well into the 20th century. the fisher building elevator cab was pictured in the winslow brothers' catalog of the time as an exemplary work. 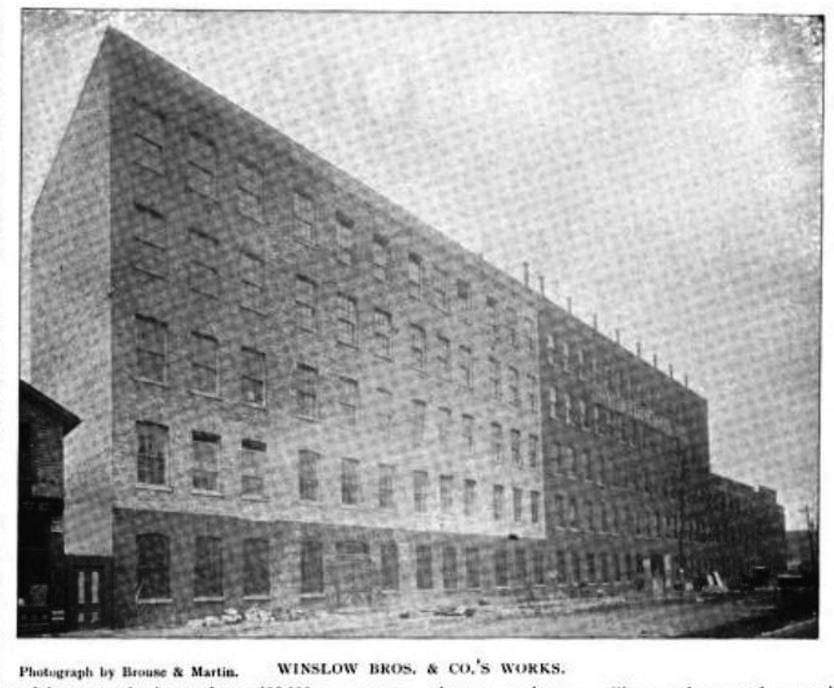 The entire building was fireproof, protected with hollow fireclay tile. on the interior, materials were equally modernized and opulent: the lobby was made of carrara marble, hallways included mosaic flooring, white maple was used in the rooms, and offices were finished in polished mahogany. the elevator grille in the collection is a treasure from this beautiful building, a component of the whimsical decor that sets the fisher apart. 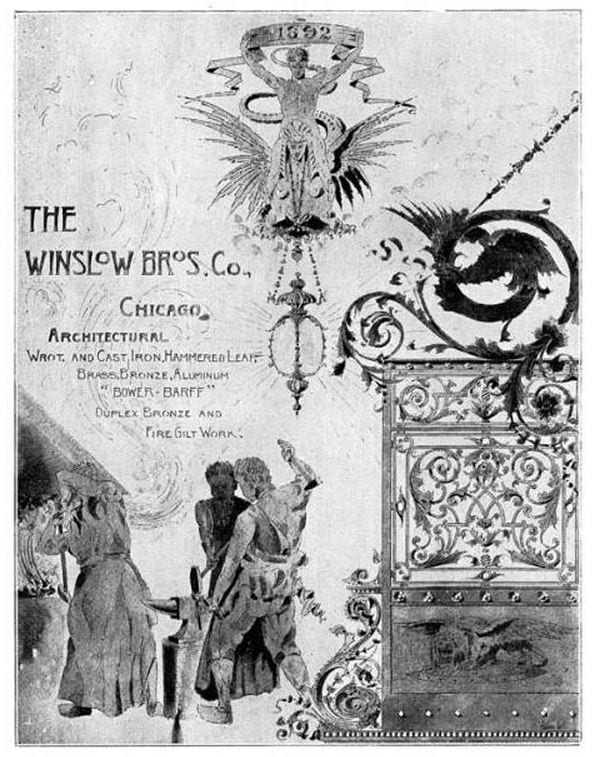 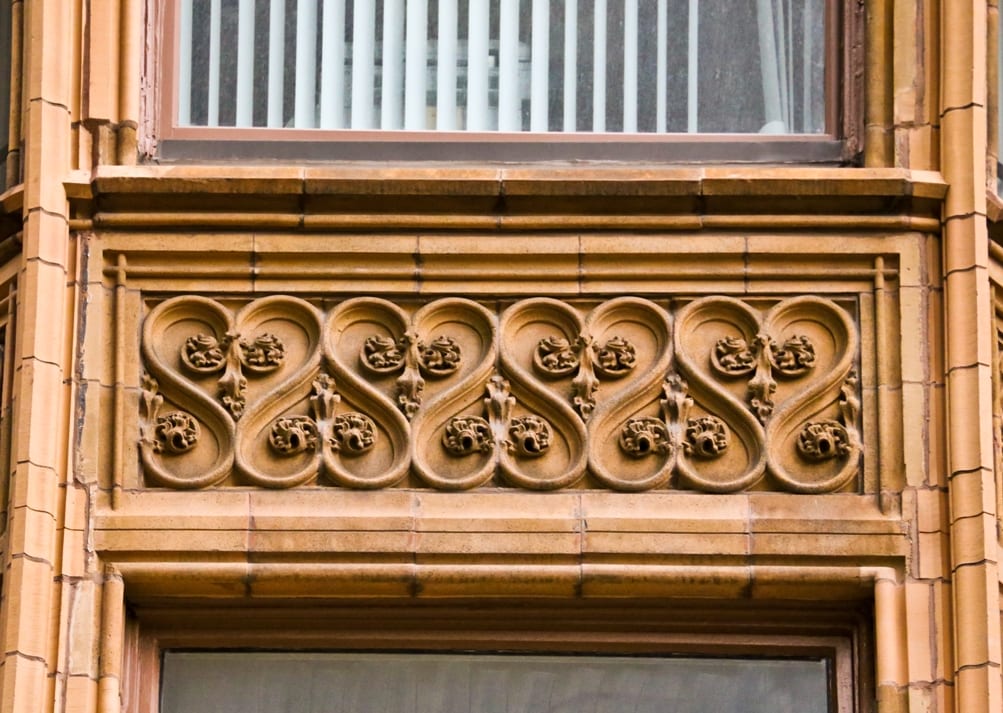 This entry was posted in , Featured Posts, Events & Announcements, Bldg. 51, Miscellaneous on August 10, 2017 by Eric.