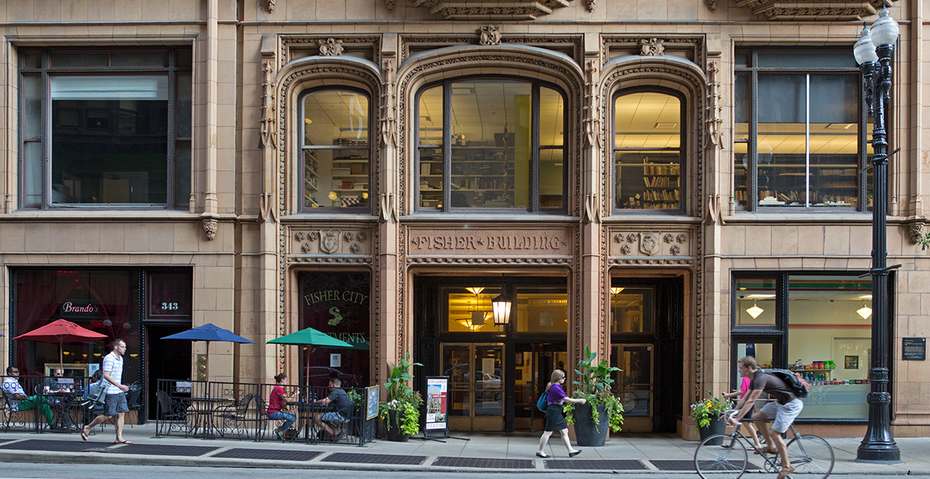 A Quick Flirtation with the Landmark Fisher Building

A good starting point for cataloguing remnants of the Chicago School's early skyscrapers is the admirable Fisher Building at Dearborn & Van Buren. With its thick coat of intricately carved golden Terra Cotta, its showy ironwork, and its strong foothold against the neighboring 'L' tracks, the 18-story Fisher celebrates the innovations of the late 19th Century: the predominance of Terra Cotta and windows (more window space than almost any building before it), and the possibilities of structural steel and elevators. If you're thinking the Fisher looks a lot like the Reliance Building, completed the year before, you're on to something. Both were designed by Charles Atwood of Burnham & Company. Atwood died as the original Fisher was finishing up and an addition was made 10 years later, in 1906. The 275-foot-tall neo-Gothic landmark was the city's second tallest when completed and has become the tallest of Chicago's still-standing 19th Century non-church buildings.

For Open House Chicago, Curbed made a date to get up close and personal with the Fisher Building. As private rental residences (with a dose of offices) the building is seldom open to passerby, and even on this special occasion just the main lobby, second floor lobby, and an 11th floor model unit were given over to the public's roving eye. With some buildings, interior ornament outshines exterior ornament. That's not the case with the Fisher, which reserves most of its fanciful aquatic and mythological carvings for the street. There are some great moments inside the structure, however, mainly consisting of arched passageways, mosaic, and woodwork. The elevators are old and attractive and, while now mostly residential, the second floor hall and elevator lobby preserves the look and feel of its office origins. Our tryst ended at an 11th floor model two-bed unit. The 850-square-foot floorplan rents through building management firm Village Green for around $1880/month. The east-facing model has wonderful views of Harold Washington Library and the 'L' from bay windows, but otherwise epitomizes the sort of hip pseudo-luxury (in decor and layout) prevalent on the market today. Stay tuned for more Open House highlights!