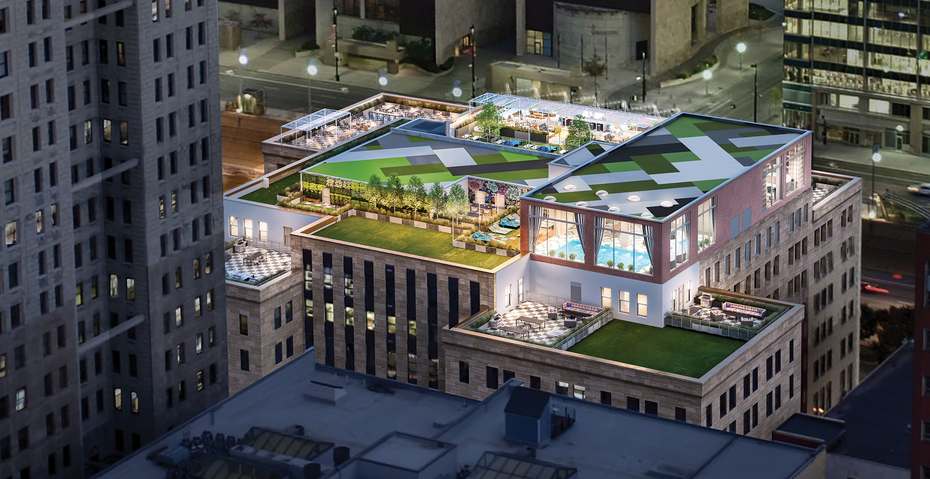 The newest address for luxury living Downtown will be City Club Apartments in the historic 309 Vine building, slated to open this fall. Wochit

Two iconic Downtown buildings were recently listed for sale for a combined total of just under $3 million near the intersection of Fourth and Vine streets in one of the area's hottest redevelopment corridors.

The Herschede building at 4 W. Fourth St., next door to Starbucks, has been listed for $1,075,000, according to Spencer Kron, a broker with Sudbrack|Kron Commercial Real Estate Services in Madeira.

Meanwhile, the old German National Bank building, which houses the Starbucks at 401 Vine St., has been listed for $1,750,000.

The Herschede building, which housed the Herschede jewelry store in the late 1800s, has remained vacant since it was purchased by a New York-based real estate investor during the last recession, Kron said.

"The building has been empty since he bought it about 10 years ago,'' Kron said. "He's just been sitting on it, and now he's looking for a return on his investment.''

The five-story building – named for famed clock-maker Frank Herschede, a German immigrant who made it rich in the jewelry business and built a mansion in North Avondale – has already generated keen interest from local and out-of-state developers, Kron said.

The Herschede building Downtown on Fourth Street has been listed for $1,075,000 (Photo: Provided)

"We just listed it last week, and we've already got people lined up to tour the Herschede building,'' Kron said. "They're looking at it for adaptive reuse as condominiums.

"These are local people, but I have a handful of emails from people from out-of-state as well,'' he said. "They see the area as a prime market for redevelopment.''

The Renaissance Cincinnati Downtown Hotel was the first major development in recent years to breath new life into the Fourth Street corridor when it opened its doors in 2014, just east of Vine Street.

In just the past year, the hotel has been joined by the Sleepy Bee Cafe, which opened a location on Fourth Street, east of Vine;and the City Club Apartments, which opened a 294-unit luxury apartment complex about a half-block south of Starbucks.

The German National Bank building is now being used as a mixed-used development with Starbucks on the street level and office space on the second and third floors. But the 3,750 square-foot fourth floor is vacant and could be converted to condo or apartment living.

The bank building has a storied history as well.

It was originally chartered in 1905 as The German National Bank, but anti-German hysteria during World War I led the bank to change its name to Lincoln National Bank.