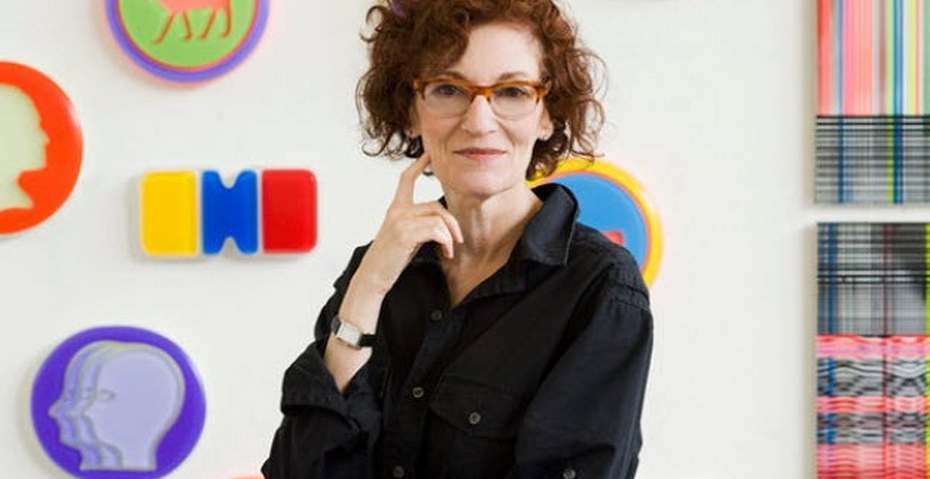 Rise, a colorful and massive abstract mural spanning 170 feet by 60 feet — the largest design she has ever originated — covers the north-facing wall of the Detroit City Club Apartments under construction at the Downtown site once holding the Statler Hotel.

“I’m a city girl at heart and wanted to make a dynamic impact,” Fishman says about her approach to the commission greeting onlookers along Washington Boulevard. “The title was chosen to reflect the theme of light — sunrise and sunset — as well as the positive changes that are occurring in the Motor City right now.”

Fishman, who teamed up with Motown Sign to complete the installation, takes on independent assignments while serving as artist-in-residence and head of the painting department at Cranbrook Academy of Art in Bloomfield Hills. Segments of her earlier work have expressed scientific and pharmaceutical themes. Beverly Fishman with some of her previous work, including her well-known pharmaceuticals.

The mural, estimated to cost $100,000, was commissioned at the direction of Jonathan Holtzman, CEO of City Club Apartments and a longtime Cranbrook Academy of Art board member.

“Art really adds dimension to a city,” says Holtzman, a member of the American Israel Public Affairs Committee (AIPAC) who is also involved with donating segments of the vast literary collection of his late father, Irwin T. Holtzman, to the National Library of Israel as it gets a new facility. “Beverly Fishman’s mural is dynamic and colorful, and the idea that a Cranbrook artist-in-residence did the design really ties together Detroiters in improving our city.” The almost-complete mural on the north-facing wall of the Detroit City Club Apartments.

The outdoor piece adorns a multi-use development under construction by Holtzman’s family-owned company with a 100-year history and a commitment to art programming in its structures. The mural adds to the artist’s lengthy resume, which lists representation in numerous exhibits in and out of the country as well as more than two dozen public and private collections.

Among the out-of-state museums that hold Fishman’s work are the Miami Art Museum, Columbus Museum of Art in Ohio and Stamford Museum and Nature Center in Connecticut.

Fishman, who earned her master’s degree at Yale and taught in the graduate program at the College of New Rochelle and the Maryland Institute College of Art, had no personal connections to Michigan when she moved to the Cranbrook community in 1992, but she learned of activities and made friendships, in part, by contacts with the Jewish Federation. She recently shared her perspective on the mural, her artistry and area experiences with the Jewish News:

JN: How did your work on the mural come about?

BF: I got the commission through my gallery, Library Street Collective [in Detroit]. While I am primarily a painter and sculptor, I have made larger installations for many decades.

This mural is a logical extension of my interest in installation art and in activating a larger environment through color, pattern and form. I am most excited by the ways in which a mural of this size can enhance the Downtown’s architecture, mark the skyline, orient the pedestrian or driver and help define the character of the neighborhood.

JN: What do you hope to communicate through your approach?

BF: The mural’s design was inspired by my interest in Detroit as a center of cultural and industrial innovation. The machine forms are intended to invoke assembly lines, speakers, boomboxes and the like, while the colors should suggest both natural and electronic lighting. The mural’s rhythmic repetitions, designed to achieve a counterpoint with the building’s horizontal balconies, are inspired by the pulse of the city’s music scene — as well as the echo of its assembly lines. I was hoping to reflect what I see as the tremendous energy of Detroit’s creative community — the fact that the city is serving more and more as a creative incubator for artists, designers, musicians and architects.

I grew up in Philadelphia before moving to New York City and then Michigan. No matter where I was, however, Motown music was always my soundtrack. Detroit always had a huge effect on me — even before I moved to the area. JN: What went into the planning stages for the project?

BF: To plan this mural, I thought a lot about the Detroit skyline and the different types of lighting conditions that would come into play in that area. I then began to work with forms that would interact with the pronounced balconies on the building and finally the color relations.

I don’t attach specific meanings to colors but rather I understand color in terms of relations. I seek to make the lines between the colors in my paintings ‘pop’ or vibrate. I want the viewer to read my colors — first one way and then realize that the actual color relationships are slightly different. I also think that color combinations can affect our moods, making us more or less calm or agitated. They can also direct our attention and create subtle connections or distinctions between different things.

JN: What have you learned from doing this?

BF: I’ll know more once the mural [has been up for a time]. I will be most interested in seeing how the forms interact with the lines of the building and the structure’s surface, which, because of the balconies, is not flat. It was very hard to plan for this. I will also be interested in how the colors translate from — in this case — the computer color system that I used to build the design to the exterior paint colors that were used to realize the artwork.

JN: What has kept you at Cranbrook for all these years?

BF: I love teaching. I learn from my students as well as vice versa. I also love their excitement and draw energy from it. I have an amazing community of colleagues here as well. Their creativity pushes me to go beyond my particular interests and concerns. I am always learning and evolving. I met my husband [Matthew Biro, professor of modern and contemporary art at the University of Michigan] while at Cranbrook so Michigan it was/is!

The full design of Rise.

JN: What artistic inclinations do you hope to encourage among your students?

BF: I want to teach them to be working artists — that is to develop a studio practice in which they work on creating art every day. I also want to teach them how to speak and write about their art — how to communicate their interests to a larger public. I also work with them on how to sell work — reach galleries and collectors — so they can continue to be artists. Finally, I try to teach them that their artistic practice should be central and that life will always get in the way. It is important to prioritize.

JN: What other projects are you working on now?

BF: I am working on a new gallery show; new prints that will be coming out with Louis Buhl, as well as a number of designs for large-scale public sculptures.

JN: What do you like to do for relaxation and fun?

BF: I work out. My husband and I are hermits, but we do like to travel to see art, friends and family. My 14-year-old Chihuahua, Lillilolli, is family and a big part of my life. She also makes sure I support dog rescues around the country.

JN: What are your feelings about the revitalization of Detroit and, in general, about your Michigan surroundings

BF: I love the Detroit area. I am required to live on campus and so I live in a beautiful Saarinen house. I run an MFA program in painting for 15 graduate students all by myself. It’s a lot of work — doing weekly critiques, running the visiting artist and critic program, organizing seminars, etc. — and the school has been set up so that my students also learn from seeing me do my work. My studio is in the same building as theirs, and I see them pretty much every day.

Cranbrook is great, but I love exploring the art scene in the metro area. I have had important relationships with galleries, resources for art [including the Detroit Institute of Arts and MOCAD] and all the artists, young and old, moving to Detroit. I am in the process of finding a new large studio in Detroit and being back in the city making work.

I think the revitalization of Detroit is fantastic and long overdue. It’s really important that this great city is finally coming back. With all the revitalization going on, there is a lot of potential for all sorts of important stuff — new businesses and communities. At the same time, I think it is very important that the people and businesses that are moving into Detroit respect the people and businesses that are already there. Detroit is in no way a blank slate, and I think that development must respect the wishes and histories of the folks who never moved out.

Read full article by Suzanne Chessler for The Jewish News