The cost to live like a boss, high above Cincinnati's urban core: $4,000 a month.

The rent for City Club's most expensive penthouse is at the top end of all asking rents Downtown and the equivalent of the monthly payment on a million-dollar home with a traditional mortgage at today's interest rates.

But developer Jonathan Holtzman, CEO of Michigan-based City Club Apartments real estate firm, is confident his "customers'' won't blink at the eye-popping rents once they see all the features and services the building will offer.

"Cincinnati has never seen anything like what we're doing here. We're raising the stakes,'' Holtzman said, referring to the $70 million apartment tower under construction in the historic 309 Vine building.

The first tenants are expected to move in by late October, and pre-leasing has already begun.

Once the building is completed, expected early next year, residents will have access to such lavish amenities as an indoor-outdoor rooftop pool, outdoor cinema, state-of-the-art fitness center, even a landscaped terrace with a dog park.

Inside, residents can choose from 150 different floor plans, ranging in size from 400-square-foot studio apartments to 1,500-square-foot, three-bedroom penthouses.

Finishes will include custom granite kitchen islands, and "sexy'' bathroom layouts available in four different packages, according to a brochure.

"We designed these products, and manufacturers are making these finishes exclusively for us,'' Holtzman said. "When you see these finishes, you’ve never seen them before.''

Hubris aside, Holtzman was quick to point out that City Club Apartments weren't designed exclusively for the super-rich.

In fact, the vast majority of apartments will rent from between $1,000 and $2,500 a month, which Holtzman said compares favorably to rents at Current at The Banks and Radius at the Banks – his closest competitors along Cincinnati's riverfront.

"You can have an apartment here that’s within your budget, whether you’re a young professional with student loans or a corporate executive working for one of the world-class companies here,'' Holtzman said. "People earning $30,000 to $50,000 a year can afford to live here … if you're earning $100,000 or $200,000 a year or more, the penthouse is a very good value.''

While such high-income households still represent a relatively small share of renters in downtown Cincinnati, their numbers have grown exponentially in recent years.

By income, the largest increase in renters in Downtown Cincinnati's 45202 ZIP code between 2011 and 2015 were households with incomes of $100,000 or more, according to the U.S. Census Bureau's five-year American Community Survey (ACS) estimates. The ZIP code also includes Over-the-Rhine and Mount Adams.

The share of such households more than doubled to 860 over the five-year period, representing about 15 percent of all renter-occupied households in 2015, according to the ACS.

The surge in well-heeled renters coincided with a flood of new high-end apartments Downtown that are open or under construction, including the 179-unit AT580 Building on Walnut Street and the 8th & Sycamore luxury apartment development with 131 units under construction.

And Downtown's residential building boom shows few signs of slowing down, according to Ginsburg, who noted Downtown landlords have not been forced to lower asking rents, which is typically a sign of market saturation in rental markets.

"I can remember at one point not long ago when we didn't think Downtown Cincinnati could support rents of even $1 per square foot,''  Ginsburg said. "Now look at us.' 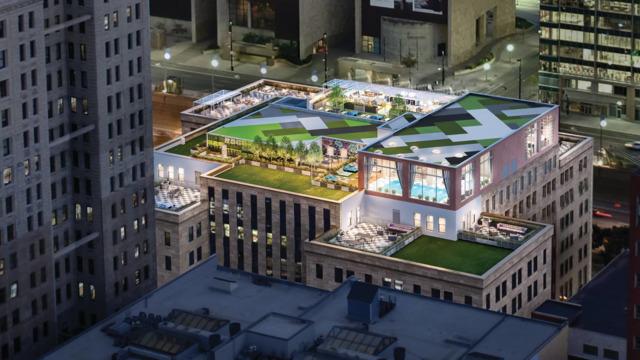